By Judith on July 10, 2011
0 Comments (Leave comment)
The very lovely Judith from Needles & Lemons (aka Miss July) gave us free reign this month, to make two blocks using the red & white Oakshot cottons she sent us.
I had intended on making one traditional block and one modern block.
But I accidentally cut too many triangles for the first, traditional block I was making, so used the leftovers to make another traditional block!
What a block-head!
Judith kindly gave us permission to post about our blocks when we’d made them, rather than waiting until the next Bee month.

Keep an eye on flickr over the next few weeks to see all the blocks being put together. 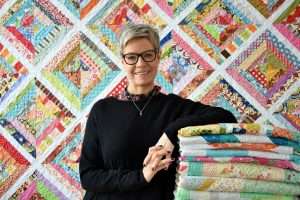 Last week I was invited by the Irish Patchwork soc

Join me and Chief Crafty Monkey, Rachel at 5pm for

Getting ready for my @craftymonkies weaving worksh

Repurposing some jeans today and found this on the

HOW TO MACHINE APPLIQUE: Ever been bamboozled by

I don't know about Spring rain (more like Spring s

The comprehensive pattern for my Triaxial Woven Ba

My best selling Etsy pattern every month, all year

I can't show you yet my new denim bag pattern!! So