By Judith
on March 8, 2012
n. the science of scraps - Just Jude Concise Dictionary
I love working with scraps ('tell me something I didn't know' I hear you say!).
The other evening I was over-analysing (again!) while putting together a bag for my daughter's friend's birthday (clearly I need to get out more!).
Is the ability to put scraps together cohesively an art form or a science?
For me most of the time it is just instinctive.  I pull out what I have, audition pieces together, and get a 'feel' for what works and what doesn't.  You have to be brave doing this, because the nature of working with scraps from different decades means they don't necessarily 'match'.
But on closer analysis, I think that's where the science comes in.
Taking this bag as an example, I realised there were certain 'rules' at play, that I was subconsciously following, but had never really verbalised them before.
As a tutor, it's not enough for me to just 'know' how to do something, I also need to be able to effectively communicate the process to others.
So the rules I found myself following last night were:
* Start with one or two scraps that you like and build around them:  I had started with the brief that this person isn't a girly girl, but not a tom-boy either, who loves the colour purple.  So I'd pulled out some purple, aqua, orange & red to get me started.
* Go with your gut (not v.scientific I realise!): I somehow knew that true green wouldn't work here, despite getting short on a variety of scraps and trying green in there.  It was horrible, and I just proved to myself what I already knew.
* Keep the scale of the prints as similar as possible.  Larger scale flowers or patterns won't work in with these smaller prints - the squares are only 4" finished.
* Occassionally put squares side by side which have an element of the same colour in them.  E.g. you can have 2 v.different squares, which may both have a bit of purple in them.
* Don't be afraid and don't discount anything until you've auditioned it.  I was initially staying away from pink due to the brief, but realised I needed pink in here to lift the other colours and bridge the darks and lights.
* Even fugly fabrics can work alongside 'nicer' prints!  I realise I'm walking on dangerous territory here with some of you, but I've never been in the luxurious position where I can afford to be picky, and have proven to myself time and again that you can still get a cohesive and beautiful whole from parts that aren't necessarily pretty. 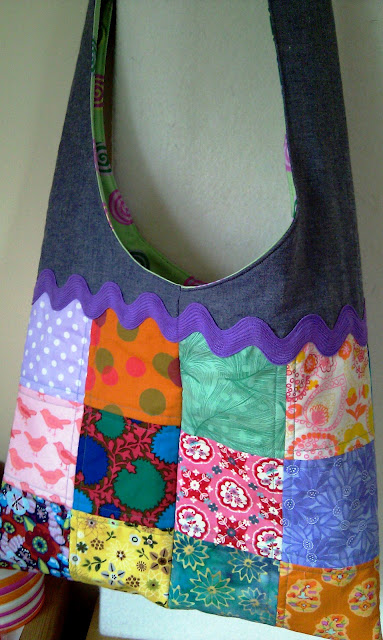 Now this finished item will not be to everyone's taste.  But when I step into certain high street bag shops, I don't always like what is on display, but they still 'work'.
Personally I love this bag!  It reflects the personality of the recipient and the maker.  And if someone made this form me when I was turning 13 I'd be stoked!
So, is scrapology an art form or a science?  I think, as with all patchwork and quilting, it is both!

I'd love to hear what 'rules' you follow when working with scraps.

P.s. Thank you everyone for your patience as I transition from Rags to Bags to Just Jude.  It's been quite a challenge for this techno-numpty, but I'm getting there with a little help from my friends!  Jxo